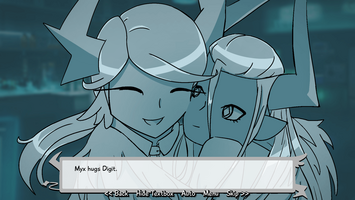 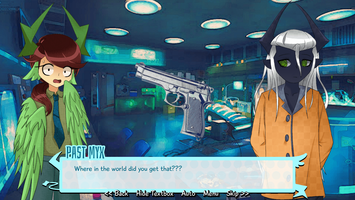 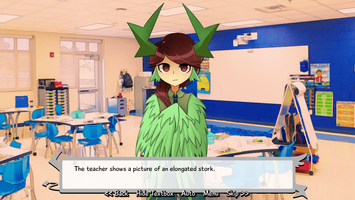 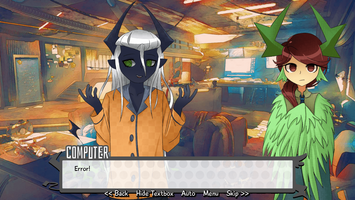 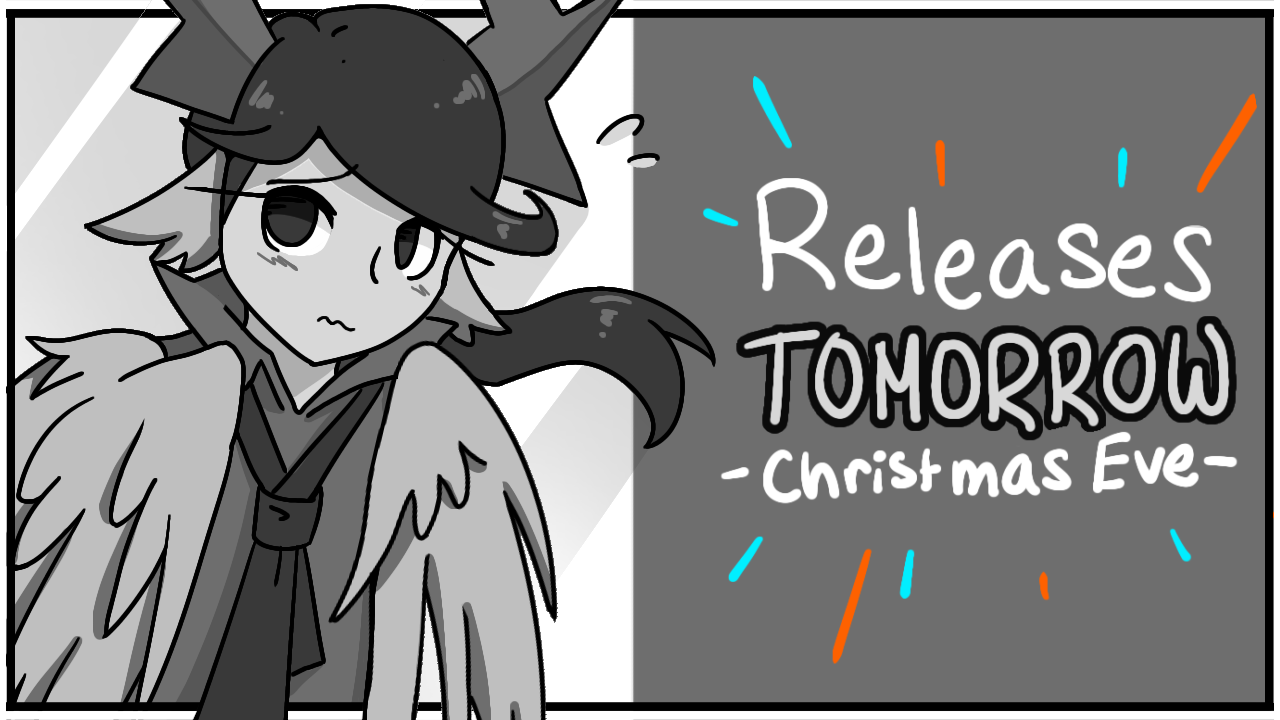 I'm starting to like making titles like these since I don't know what to call them, hehe.

We're nearing the final days of Winter VN Jam! (I can't believe my last post was when I said the jam just started :'D)... I have been just a tad bit stressed these past few days from a certain lovely section in MBM that was difficult to write.

All the screenshots of MBM have been changed because of the dialogue box, but not the GIFs oh no no. Those were too difficult to compress and make.

I've decided to stick with the "dead" eyes for this VN and the rest of this series, despite people saying the one with the extremely polished eyes was better. To me, the polished version felt sickening XD. Even before I made PUQFFAL, I have been inspired by Danganronpa's style and it makes the overall tone feel a bit more... serious. The cute parts come from the interactions between the characters!

Here's another surprise surprise, instead of having none of the CGs polished at the time of initial release, I was able to manage my time and get 10/12 of CGs currently polished! I will see if I can polish the last two, but they are much more complex and require lots of linework. Now it's time for the usual...

(From the last time I posted up 'til now.)

Sprites: 100% (there were too many variations. it was worth it.)

Story: 100% (I'm a bit relieved I made a storyline that I'm extremely pleased with!!! My own game made me experience all human emotions :D)

Music and (new) Sound Effects!: 100%! (All are placed properly in the script mwhaha)

Backgrounds and Scenery: 100% (Still only edited, I wasn't able to find them even with Google Image search)

Overall, the only things I'm missing are the last CGs!!! I will also need to run through the game a few more times to make sure the sounds and sprites are all in good order.

Because of how well everything is going, this VN will be released on Christmas Eve (December 24th)! This was actually my original goal, so I'm really proud I was able to make it in time, even if I thought I'd have a lot of room to spare...

Stay tuned for a final release update and a post mortem with advice :3

Here's the promo image I posted yesterday on Twitter:

Aaand here's a sprite sketch of someone familiar I never posted on itch :D
Don't worry, she's already polished by this point! But she only appears for 5 seconds... 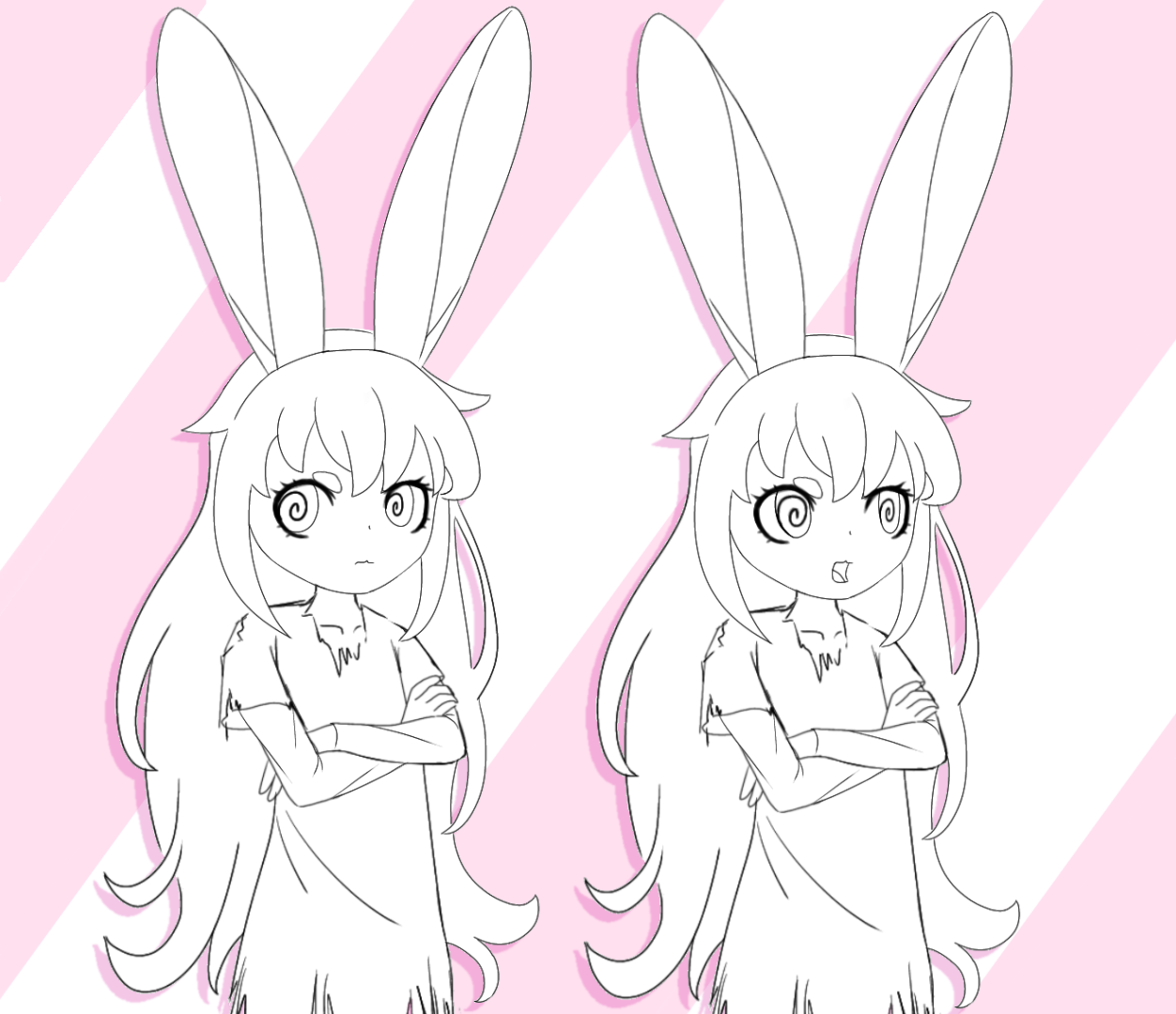 Play the first game, PUQFFAL!!!, here (and keep in mind that it's literally my first game): https://mintglow.itch.io/puqffal

The game itself! (you might be spoiled if you didn't play PUQFFAL!!! first): https://mintglow.itch.io/myxs-bittersweet-musings

Thanks for checking out my devlog!!!

A short, seasonal visual novel about relationships and perceiving the past. (Specifically, Myx's past...)

lot of great news and looks a lot of work but it pay off surely :) waiting patiently to play it :)

I see you around in the VN community a lot, it is really kind of you to comment and try out so many games, thank you :D

for me it's important to leave comments for the creator of a visual novel or other games/tools/assets so they know it has been seen and obviously liked/loved :)

I guess we are! Nice meeting you :3 and that's a really great way to think about it!

Ratings are lovely, but creators are still people and they want to feel like they're being heard/seen/talked to, so I agree comments are the best way to show them what we are thinking :D

nice to meet you Mint :) i'm happy we think the same way :) i'm an introvert person and talking about things i like make me look like a chatterbox :) . edit : i would be happy if we could talk outside of itchio ,though i don't want to force :)